One of the #RevolutionNow protesters, Tope Akinyode, has accused the Nigerian government of failing to rise to the challenges of the people.

Akinyode, who is the National President of Revolutionary Lawyers’ Forum, called on the present administration to resign.

He made the call during his appearance on Channels Television’s Sunrise Daily on Thursday, a day after #RevolutionNow protests held in Abuja, Lagos, and some parts of the country.

When asked if the protesters are calling for a change of government, Akinyode said, “A failing government has no reason to stay; there’s no point reinforcing failure.

“Nigerians have the right to demand the resignation of a government that has been underperforming.“

According to him, the protests involve a group of concerned youths who are exercising their fundamental rights by holding the government accountable.

‘Not Too Big To Ask’

The lawyer listed some of the demands of the protesters to include the creation of job employment, securing the lives and properties of the people, and improving the welfare of Nigerians.

He also decried the situation where youths in their number struggle to provide for their basic needs after graduating from various tertiary institutions.

“As it is today, there is a high level of poverty in the country, Nigeria is well-rated globally among the poorest countries of the world. There is a rise in insecurity all through the country, especially in the northern part of the country,” Akinyode said. 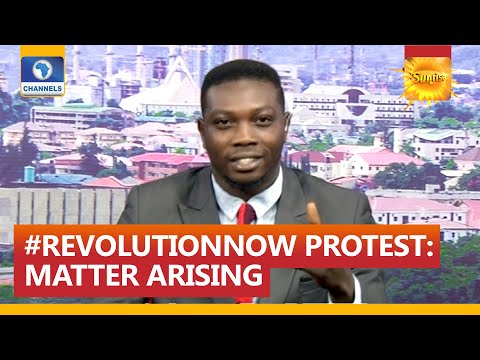 “That’s why #RevolutionNow protest has continued and that’s why it held yesterday. It is not too big to ask. … it is the fundamental rights of the citizens to make these demands.”

Reacting to the action of security operatives during the protests, the lawyer believes the government is bereft of the fundamental workings of democracy and the rule of law.

“They don’t know what protest means, they can’t appreciate it,” he said.