On Friday, NBC News became the first foreign news organization to be granted access to the institute since the COVID-19 outbreak began, visiting the lab and meeting with scientists who had been working on the origin of the coronavirus.

Yuan Zhiming, vice director of the institute, reiterated that scientists at the facility obtained their first samples of the coronavirus after a pneumonia-like illness was firstly reported in Wuhan last December.

“I have repeatedly emphasized that it was on December 30 that we got contact with the samples of SARS-like pneumonia or pneumonia of unknown cause sent from the hospital,” Yuan said. “We have not encountered the novel coronavirus before that, and without this virus, there is no way that it is leaked from the lab.”

He said that regular health checks are conducted for the facility’s personnel. So far the institute has not encountered positive tests for the virus or its antibodies, which would suggest that a person had the virus at some point.

Wang Yanyi, director of the Wuhan Institute of Virology, said it is unfortunate that she and her colleagues had been targeted as a scapegoat for the origin of the virus.

“Any person would inevitably feel very angry or misunderstood being subject to unwarranted or malicious accusations while carrying out research and related work in the fight against the virus,” she said, urging that politics not cloud investigations into how the coronavirus spilled over into humans.

Wang said that none of the institute’s scientists contracted the virus, which she said made it extremely unlikely that the pathogen could have escaped from the facility.

Peter Daszak, president of EcoHealth Alliance, a New York City-based nonprofit dedicated to studying and preventing pandemics, worked with the Wuhan institute for 16 years until the U.S. government cut funding this year. He also rejected the idea that the virus could have leaked from the lab.

“The fact that they published the sequence so quickly suggests to me that they weren’t trying to cover up anything,” he said. There is “absolutely zero evidence that it escaped from a lab.”

In May, Anthony Fauci, director of the U.S. National Institute of Allergy and Infectious Diseases, also said there’s no scientific evidence the coronavirus was made or escaped from a Chinese lab. 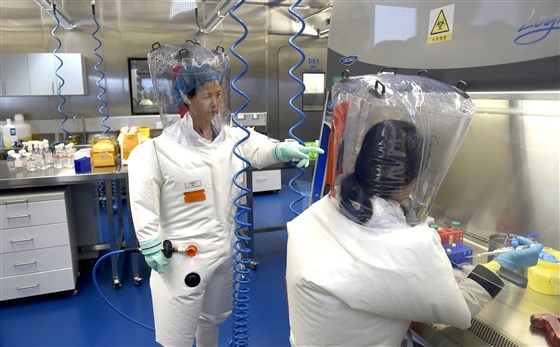 Scientists at work in the BSL-4 lab at the Wuhan Institute of Virology. /Getty

Why is the lab targeted?

The WIV has become the focus of speculation, as the Trump administration has been fueling conspiracy theories that the virus was leaked from or even manufactured at the Wuhan lab, often through racist rhetoric, by regularly referring to the pathogen as the “China virus,” the “Wuhan virus” or “kung flu.”

The White House has shown no credible proof to back up those claims, and neither have any other sources.

The WIV, founded in the 1950s, is a prominent research institute that enjoyed an even more elevated profile after it opened the BSL-4 lab in 2015, which is the first in China to receive the highest level of bio safety clearance.

NBC News wrote that the institute had become the target of conspiracy theories partly because it is equipped to study the world’s highest-risk infectious agents and toxins, like the latest coronavirus. During their five-hour tour, what the reporters saw were “technicians clad in bubble-like protective suits handled small vials and other equipment while sealed inside a thick-walled glass enclosure.”

Currently, scientists at the lab are focused on the coronavirus. But normally, work at the facility includes research on some of the most dangerous known viruses, such as Ebola.